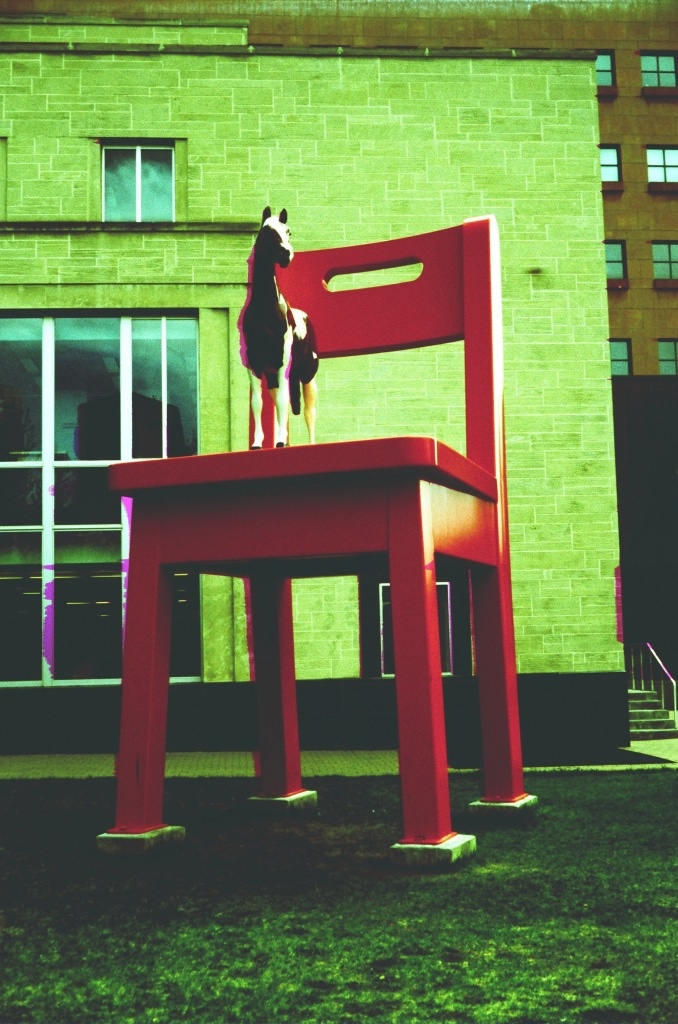 Horsing around by Everett Vinzant is licensed under a Creative Commons Attribution-NonCommercial-NoDerivs 3.0 Unported License.
Based on a work at wn7ant.com.
Permissions beyond the scope of this license may be available at wn7ant.com.

This is a picture of artwork that is outside the Library in downtown Denver. What is the interpretation for this piece of art? There is a quote from the feminist movement, “a woman needs a man like a fish needs a bicycle.” Maybe the artist is a feminist? Or, perhaps this indicates intellectual absurdity (as it’s right outside the library) because at no time should a hose ever need a chair. It’s easier to admit, “It just doesn’t make sense.”

There are many things that don’t make sense at one time or another. A friend explained the meaning of exhortation to me with an example, now it makes sense. Electoral colleges are explained every election, because the term does an inadequate job of providing meaning. For some, there is a time the whole God thing doesn’t make sense. This is a common conversation regarding belief in God:

So half of the people reading this are going to say, “great, prove God exists, I dare you.” The other half are going to click to another page, because they think I’m saying God doesn’t exist. Stop. The conversation here is about argument, and knowing what you’re talking about.

Acts 17:11 Now these Jews were more noble than those in Thessalonica; they received the word with all eagerness, examining the Scriptures daily to see if these things were so. First, let’s ALL agree in the historical value of the Bible. That won’t be debated here, because scholars the world over have examined the documents that the Bible is translated from and found them accurate.

Be careful with concluding that historians are Bible scholars from the prior statement. It doesn’t mean that historians agree that everything in the Bible is true and correct. The statement is exclusive to historical accuracy. To achieve this understanding, they did exactly what the Jews in Thessalonica were doing.

How much time do we spend trying to convince people of what we are talking about, without knowing what we are talking about? People have quoted Stallin, Ayn Rand, and Spock (the SciFi caharacter) as “scriptures.” How much time do we actually spend not just reading, but studying? How come historians know the contents of the Bible better than people who profess to follow its teachings?

This site uses Akismet to reduce spam. Learn how your comment data is processed.